A famous one, mainly for two iconic Disney scenes- the Bella Notte spaghetti kiss, and the We Are Siamese If You Please cats (who probably make every person from Thailand SUPER SUPER HAPPY that it’s not called “Siam” anymore).

The film’s pretty good, and actually does a good job with the love story, and the portrayal of both characters being on different sides of the tracks. Me, I’ll always remember their weird case of dog breeding, where all the girls are Lady’s breed (American Cocker Spaniel), and the boy is basically a clone of Tramp the mutt. Upon learning years later what dog breeds were ACTUALLY like (ie. not direct clones of the same-gendered parent), I got a kick out of this.

Rover Dangerfield (an awful, AWFUL later-era Don Bluth movie) utilized the exact same trope in it’s ending (now called “Gender Equals Breed” on TV Tropes), probably in reference to this. It’s a bit funny that the villains are usually more annoying and troublesome than evil (except for that horrible rat, which is oddly super-motivated in it’s attempts to kill a baby), and the cats are really more bitches- though are now iconic “Mean Cats” and have overwhelmed the numerous good cats in Disney movies in fame. So this is more of a low-key love story than anything, and it works on that level.

It’s based off of some story I’ve never heard of (it’s funny- people joke that all Disney stories are fairy tales, but there’s a LOT more of them devoted to children’s novels that have since gone forgotten because Disney’s fame has overwhelmed the original works) called Happy Dan, The Whistling Dog, which appeared as a serial in Cosmopolitan magazine only ten years prior to the film’s release.

I think my favorite bit is when “Jim, Dear” announces that “Just this ONCE!” the crying puppy Lady can sleep with her owners in bed, then the scene shoots to an adult Lady… in the exact same spot on the bed, having long-since won this contest of wills.

The songs are a bit old-timey and don’t hold up well. Peggy Lee did most of them (and won $3.2 million in a 1988 lawsuit when Disney tried to get out of paying her royalties), and they’re very “of the 1950s”, as is the opening which is just people droning on and on in that “Old-Timey Movie” sort of way.

The movie was a HUUUUUUUUUGE smash at the time (making the most money since Snow White, and a bit more than the next movie, Sleeping Beauty), despite some bad reviews. It’s also gone on to have one of the most famous movie romances ever, despite being ABOUT DOGS, which is an achievement in and of itself. Only a few years later, Disney would do ANOTHER “Dog Movie”, and the lasting success of THAT one is why you see them go to that well so many times.

I remember a comic featuring the little male puppy, Scamp, when I was a kid, and he finally got his own feature in 2002’s straight-to-DVD sequel. 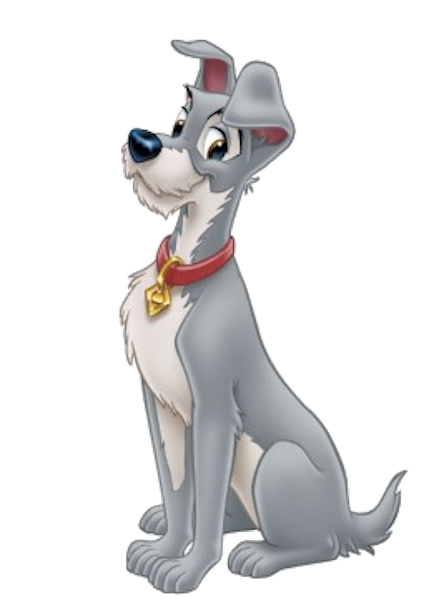 Both Tramp and later character Dodger (from Oliver & Company) are cut from the same cloth, being streetwise, smart-alecky characters who play mentor roles and are generally good with bitches (I’M NOT SEXIST DON’T HURT ME I AM REFERRING TO FEMALE DOGS), and are quite sprightly and good at fighting for their small size. The Tramp leads “Pidge” (Lady, nicknamed because of her naivete) through the streets, saving her from vicious strays, and even has her muzzle taken off by a friendly beaver at the nearby zoo.

About the Performer: Larry Roberts was an actor of some note in the early days of television, appearing on a lot of variety shows. However, he quit the business in the 1950s and moved on to ladies fashion. He died of AIDS in 1992, with The Tramp being his most famous role by far.

Lady is a classic pampered puppy, being the darling of owners’ eyes until they have a child, at which point an annoying old maiden aunt takes a disliking to her, and all manner of calamity befalls her. Unwise to the ways of the streets, she is taken in by the clever Tramp, and eventually falls for him, despite hearing about his tomcatting ways.

About the Performer: Barbara Luddy was a huge part of the Disney Canon, playing not only Lady, but Merryweather in Sleeping Beauty, as well as Kanga in the Winnie the Pooh features. That’s some SERIOUS range, actually- she was basically the Alan Tudyk of her day! Now that I think about it, her quavering “old lady” voice was actually a very warming, caring way of speaking that I recall from a LOT of Disney features (her “You put that BACK!” while playing a rabbit mother in Robin Hood has always stuck with me).