The worst that one could say of The AristoCats is that it is unmemorable. It’s smoothly executed, of course, and enjoyable, but neither its superficial story nor its characters have any resonance.
-Leonard Maltin

BLEH. A movie all about jazz music (one of my least-favorite genres) and basically being the exact same thing as 101 Dalmatians but with a butler trying to kill them instead of an interesting villain that owns the film. Every part of this feels like a retread (complete with Phil Harris doing his Baloo/Little John voice), and it’s very weak. Eva Gabor plays the elegant, refined Duchess, and Harris plays O’Malley the Alley Cat, and my god, it’s also ripping off Lady and the Tramp completely.

One of the few Disney movies that paint CATS in a positive light, this one came about because Walt wanted some more “animal pictures” for TV programming, but ultimately it got turned into a feature. Walt wanted the story to feature more on Duchess’s desire to find good people to adopt her kittens, but after he died, the writers turned it into a 101 Dalmatians-type Action Comedy. The two villains, a butler and a maid, eager to assassinate the cat & kittens in order to inherit their dead owner’s money, was turned into just a single butler in order to simplify things.

The movie was the last one that Walt personally greenlit. It was largely done after his death in 1967, following wrapping of The Jungle Book. It was also the last movie worked on by the Sherman Brothers, who’d worked for Walt for years. They left the studio following disillusionment with the Post-Walt organizational structure.

The movie did very well for the time, but didn’t have much impact on Disney as a whole, who largely ignored the characters.

Marie, the female kitten, is quite popular in Japan (which has a very strong obsession with cats, as well as cute things- making her one of the few Disney characters to match BOTH of those things).

Tokyo DisneySea features a big celebration of jazz & big-band music that features tons of appearances from Disney’s biggest characters… and Marie, who gets her own solo number.

A sequel was planned in the 2000s, but John Lasseter becoming Disney’s Chief Creative Officer put the kibosh on all sequels, as it was believed to be devaluing the Disney brand name.

Okay, every kid loved this series of shorts (at least the ones I knew). They’re so successful that they pretty much effortlessly became BY FAR the most famous stuff related to Pooh (heh heh), unless they know a great deal out of the weirdly-drawn children’s stories about a Canadian soldier’s bear (“A Part of Our Heritage” indeed) and how it ruined the life of Christopher Robin Milne.

You can actually determine a lot about a person by which Pooh characters they most respond to:

Really, it’s a massively-iconic collection of kids’ characters, which is why it’s been so popular over the years. There’s been a long-running cartoon series, a couple other movies (one of them CGI), etc.

The stories by A.A. Milne were of course massively popular back in the day, much to the annoyance of the author (who considered himself more well-rounded than “just a children’s book author”). The stories about his son Christopher Robin’s stuffed toys became a sensation, and continued to be such even after he ended the series rather early (with the toys having a “Farewell Party” for Christopher, who was implied to be leaving for school, and wouldn’t need his toys for companionship any longer).

Disney, which was struggling financially at the time (its previous feature was FOUR YEARS EARLIER), made this one on the cheap, simply gathering three animated featurettes together with some extra material. The film was the final one in the Animated Canon to feature any kind of involvement from Walt, as he’d overseen the release of one of the shorts before he died in 1967. This makes a big crossing point for the studio.

This series of shorts did MASSIVELY well, and were a regular appearance in my home as a child (I watched it so often I can even recall the commercials for trucks and Big Red chewing gum that were on the same tape!). Disney’s interpretations of the characters would become a near-universal default, with nobody else touching them. There’d be a TV series or two, dark rides in all the Disney Theme Parks (the best of which is Pooh’s Hunny Hunt in Tokyo Disneyland, a trackless dark ride that shames all the other, pretty low-key offerings elsewhere).

Most of the performers are not that well known today, though Don Fiedler’s distinctive voice as Piglet can also be heard as Juror #2 in Twelve Angry Men.

Howard Morris as Gopher is far more well known for being on The Andy Griffith Show and Sid Caesar’s sketch comedy show.

Bruce Reitherman would voice both Christopher Robin and Mowgli in The Jungle Book who interestingly now mostly directs documentaries.

Eeyore’s voice, Ralph Wright, was actually a prolific Disney animator who just had the right tone.

It’s also one of the few films in the Animated Canon to have a sequel also within the canon, as 2011 saw the release of: 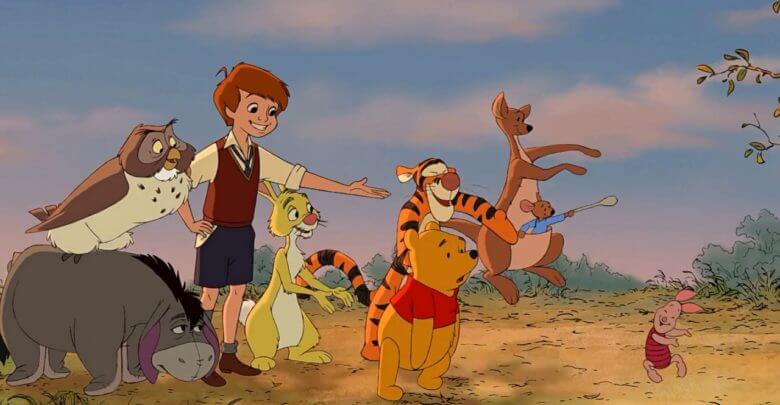 This sequel of sorts brings back all of the classic Pooh characters, as they attempt to save Christopher Robin from an imagined assailant. One of the movies John Lasseter worked on when he moved over to Disney, it featured a lot of talent from the studios (such as the husband/wife team that helped make Frozen such a smash hit). Like most Pooh things, it’s a very… quiet film. I’ve actually never seen it, so I can’t give you an honest review.

The movie was made on the cheap, but is by far one of the most poorly-received Disney Animated Canon productions in terms of box office receipts, making only $50 million (to put that in perspective, it’s about 1/6th of what a big Princess Movie might make).

A lot of it can be chalked up to being released the same weekend as the final Harry Potter film. Reviews were generally positive, at least.