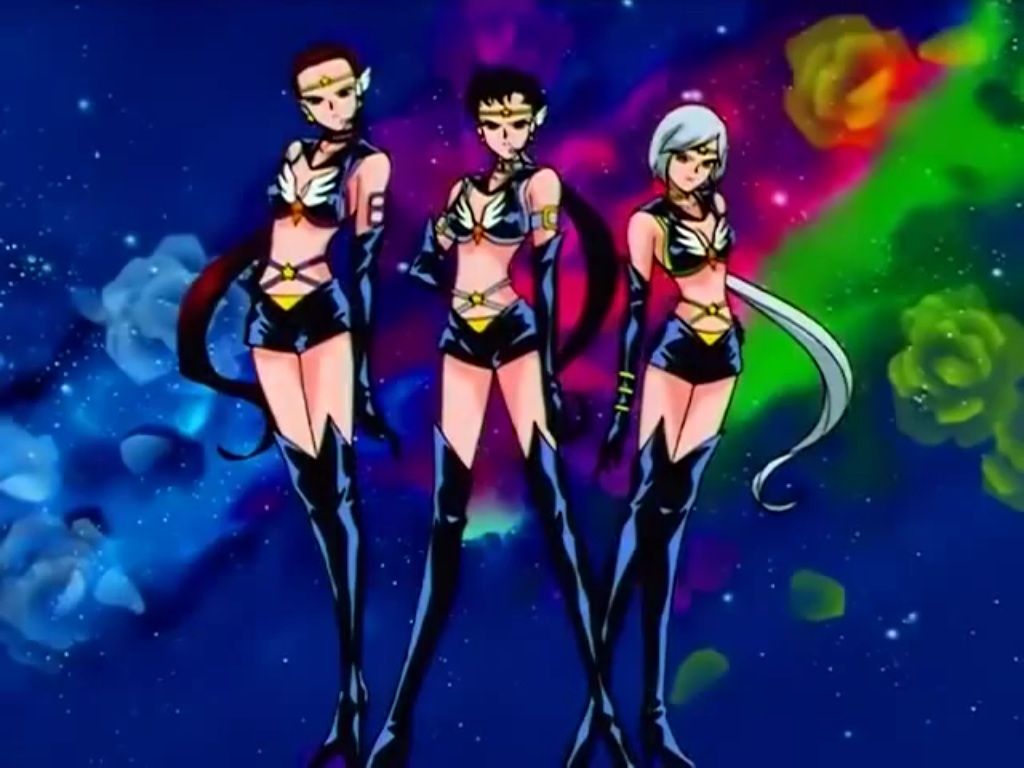 It’s time for more Sailor Stars! Last episode, Sailor Aluminum Siren screwed up one final time (despite knowing Sailor Moon’s secret identity and her nature of a True Star Seed carrier), and her flippant attitude towards failure got her EXECUTED by Sailor Galaxia, the show’s ultimate villain! Sailor Tin Nyanko now replaces her, with Sailor Lead Crow emotionally shattered by the death of her “rival” (who is now revealed to have been a dear friend, though their relationship is, um, QUITE speculated upon in the fandom).

Oh, also: The Sailor Starlights and Sailor Senshi know each other’s secret identities! So the drama of the past season has come to a head and everyone knows the ballgame. The unfriendly rivalry of the two squads mixes in with the real friendship they had in their human identities, and that’s just making it MORE hairy!

So now the cat’s out of the bag and everyone knows each other’s secret identities, leading to Usagi being pensive and worried- Mina’s like “LOL well I guess my love interest is a girl; so my for my romantic life!” (which, funnily enough, is an aspect I always forget about until it’s mentioned) until the others notice how Usagi’s uncomfortable with it. Seiya gets the same way at the Lights’ hideout, and when Taiki & Yaten are like “Hey, we can use the Sailors’ war with Galaxia to our advantage, because it distracts Galaxia from us”, Seiya’s all “SHUT UP!”. He points out how those girls put their lives on the line for their galaxy, and “how DARE you take advantage of them! You should be ashamed of yourselves!”, but Yaten quickly recovers with “Oh, I see. This is about that girl”. Seiya’s about to throw down, but Taiki cuts to the chase and points out that it’s because Usagi reminds Seiya of “our Princess” and stops the fight by acting a little bit sympathetic and understanding. “You know there can be only one Princess for us, right?”

Meanwhile, Sailor Tin Nyanko acts really snotty about how bad Aluminum Siren was, leading Lead Crow to first suck it up, but eventually just get angry before trying to regain her composure. The deal now is that Nyanko is easily annoyed and frustrated, and disregards the help of others.

Oh hey, this one is Rei-themed! She ends up acting as a fortune teller in a department store (moaning about her her Grandpa shoved her into this spot without asking her), and of course her first client is Seiya, who confesses about “keeping secrets” from a girl until it was too late and she found out anyways. She gives some pretty basic advice about just apologizing to her, which he confesses is something he shouldn’t have needed help on, and takes his leave with gratitude. And then Usagi immediately plops down after him to ask advice, lol. Cuz of course Rei’s first two clients are two people she knows.

So Usagi finally gives us the real skinny (“I already have a boyfriend” and she doesn’t LOVE Seiya; just likes him as a friend), but confesses to the same things. Rei then promptly, in a great moment, reads right through Usagi and points out that “You’re better at acting than thinking, right? So just GO to him” and says “saying you can’t find him is just an excuse- you’re afraid of rejection; if you’re afraid, you’ll lose what’s really important”. Because OF COURSE Rei, most critical of all the Sailors yet probably the most insightful of them because of it, knows how Usagi is about these things, and what she’s good at. Rei then reveals her identity and tells her to have courage, and dwell on what he thinks AFTERWARDS.

The two finally meet up at a radio show, and USAGI is the one apologizing for some reason, but the DJ is attacked and Sailor Mars nails his spinning CD attack. They easily beat the Phage, but now Lead Crow wants to fight ALL the Sailors! “It’s your fault Siren got…”, but while she prepares to engage, Nyanko sneaks in from behind (“She really is hopeless- there’s no way I’d take them all on from the front”)- she prepares a massive energy beam, lashing out at Sailor Moon! But now Seiya dives in with a big “Hero Moment”, jumping in the way of the blast and getting hammered! The other two Starlights (already transformed) attack with their weapons, sending the Anima-Mates scurrying away, and freak out at Sailor Moon for touching Seiya. “It’s YOUR fault that Seiya got hurt like this!” and all that. Yaten & Taiki finally give them the ultimate brush-off (“Don’t come near us any more”) and storm off, leaving Usagi crushed.

Pretty important one, driving a divide between the Starlights & Sailors seemingly for good- all the cards on the table. But Seiya’s still chasing Usagi around. I’m weirded out by USAGI thinking she has things to apologize for, but the bits with Rei cutting to the chase and giving Usagi the best version of a compliment from her (accepting her faults, but pointing out the things she’s innately best at) are “Understanding Rei 101” and something that makes her recognizably Best Girl to those of us with taste (SHUT UP SHE IS BEST GIRL I’LL FIGHT YOU).

Sailors Uranus & Neptune are back. FINALLY.

FINALLY we get to see Haruka, Michiru & Setsunah again! This time, the Outers are hilariously just as mistrusting of the Starlights as before, even after figuring out who they are. They’re all “No, Usagi, you stay away from them!” but now Usagi’s just COMPLETELY despondent and unable to deal with not being able to see Seiya anymore, because she feels sooooooooooo guilty about him jumping in the way of an attack meant for her. They’re all like “our job is to protect the world from threats outside the solar system”, which the Starlights are viewed to be, but Usagi still freaks out at their being so callous and mistrusting. But then Seiya phones Usagi and tells her to “listen to my song” at their next concert- it explains everything.

And explain it, the song does: it beams his words right into Usagi’s head, pretty much. We see shots of Sailor Galaxia destroying world after world (taking the Star Seeds, which are the energy of their stars, to give Galaxia total control), including that of the Starlights- their Princess escaped to Earth, soon followed by the Starlights, and they’ve been searching for her ever since. Their song is meant to locate that Princess- they hope she can hear it and come find them. Seiya gives Usagi this message, but immediately collapses, to the horror of the other Lights. Meanwhile, Sailor Lead Crow attacks our weekly victim, adorably trying to give her Formal Japanese Greeting, as Siren would (oh, it’s really clear at this point her feelings for her friend).

Crow bails immediately after Sailor Amuse comes out, and he attacks Usagi & Seiya- Sailor Moon transforms and tries to protect Seiya as he keeps collapsing, and they’re saved from a balloon barrage by Sailor Uranus, Neptune & Pluto! FINALLY they all get in on the attack! Deep Submerge takes out most of the balloons, and his gigantic red one is sliced in twain by the “Space Sword Blaster”, damaging him enough for Sailor Moon’s transformation attack. The Outer Senshi give the Lights a final kiss-off, reminding them that “We’ll guard the planet ourselves”, which Taiki responds to with a douchey “You do that- it’ll save us the trouble”, and Haruka prevents Usagi from chasing after them.

So I guess this is our new status quo- the Sailors being even MORE unfriendly, largely owing to the outside groups clashing with each other… and Usagi still carrying a bit of a guilt-torch for Seiya (whom she certainly doesn’t seem ATTRACTED to anymore, but still cares about). Still, she’s being uncharacteristically super-morose about all this.

So mysterious butterflies of light appear all around, summoning Chibi-Chibi, and the Starlights immediately recognize it as the energy of their Princess. Usagi’s mystery depression continues, while the girls go to a Game Convention hoping to confront Taiki, who’s there as a guest. This lets the episode’s director (who has a really weird art style, I gotta say) showcase a lot of Anime/Game Cosplay, though the only one I recognize is a more G-rated version of DarkStalkers‘s Felicia. Ami wins a game tournament simply by observing the controls and movements, and the thing is shot in the most dramatic way possible (with the other Sailors treating their losses as if they were actually killed), and this lets Ami finally confront Taiki. He blows her off, but she goes all “Usagi is the best and most loving person ever, etc.” and points out that Seiya only got hurt because he saw the same things. But then of course the villains attack.

“Sailor Gamer” easily crushes Sailor Mercury, even blasting through her attack. She tries to fight on so as not to be a burden and need saving, but this Phage actually wipes the floor with all four girls. Star Healer’s Star Gentle Uterus (hee) stuns her, and Sailor Moon finally arrives, having been brightened up by Chibi-Chibi’s “scent”- which Taiki recognizes as that of their Princess. Taiki is forced to acknowledge that Sailor Moon IS “the radiance that refuses to go out”, as Ami put it, since she cheers up Seiya AND saves the day.

Ominous Portents: This is the final appearance of Jupiter Oak Evolution & Mercury Aqua Rhapsody, as well as the last time we’ll see the Game Center Crown hangout location. Given that those two attacks are the primary ones for Jupiter & Mercury and there’s eight episodes left… that doesn’t bode well.