Welcome back! We now enter the set that includes the ONE-HUNDREDTH episode of Sailor Moon (and is thus the mid-point for the entire series). We’ve just learned that the Talismans both sides are searching for are apparently to be combined into the Holy Grail, which will be wielded by The Messiah.

In short: Shit is now Biblical.

This one features lots of swimming. But in full-body swimsuits, you PERVS!

An introspective one, as Ami is lectured by the Vice-Principal about helping lower-end students (ie. Usagi) study, which might negatively affect her own grades. In a great bit, Ami scolds him for the idea (Ami talking back to an EDUCATOR is a big deal), but begins to think about her life- if ALL she has is her studies, then what is she, really? Is her dream to become a doctor really all there is to it (“people with TRUE dreams have a SHINE to them” Ami suggests)? Will being a great student actually mean she’ll be a great doctor? Then we get a neat moment where she & Mamoru (the two most mature… well, ONLY mature… members of the Main Cast) talk about her troubles, and he shows a rare flirty side in suggesting “If I had a cute doctor like you, I wouldn’t mind getting my shots!”. Well, they’re at least developing him a bit, I’ll give them that.

Usagi, who overheard Ami’s conversation with the Vice-Principal, scolds the others and says “Studying is something you do by yourself!” when the girls start harassing Ami for scholastic help- hilariously, this causes FEAR in others, who are staggered that “Usagi… said something admirable!” Unfortunately, Usagi’s obsession with Ami’s studying just hurts Ami all the more, because her identity is so wrapped up in her grades.

Then Ami goes through some more issues, as she engages in a swimming race with the similarly-aquatic Michiru… and holds back at the last second (her lack of confidence makes her not want to cause hurt feelings). Michiru chides Ami for doing so, embarrassing her- in a nice reversal of events, now HARUKA is chiding MICHIRU for being impolite, as she realizes that Ami is very sensitive and easily-embarrassed.

And in another great bit, Usagi does what only she can- she gets that something’s bothering Ami, and tries to chase her down and make it better; she is notably the ONLY Sailor empathetic enough to realize this. And Ami actually feels better after a truly competitive swim-race with Michiru- she does her hardest this time, finally getting that trying her best is its own reward- “If I relax now, I’d be running away!” Of course, then the Daimon attacks, barely does anything, then gets killed- Tuxedo Mask whups on it, while Luna & Artemis actually pop her inflatable tube, sending her scurrying all over the pool. A pretty hapless threat.

The ending is THE BEST, though- Ami renews her purpose to be her very best self… but when Usagi gets paranoid over her & Tuxedo Mask sharing a moment, Ami actually GRABS HIM and suggests she’ll go for THAT, too! “You know I’ll try my very best!” “No no no no no!!” AMAZING. You NEVER see Ami tease her friends like this! God damn I love this episode. 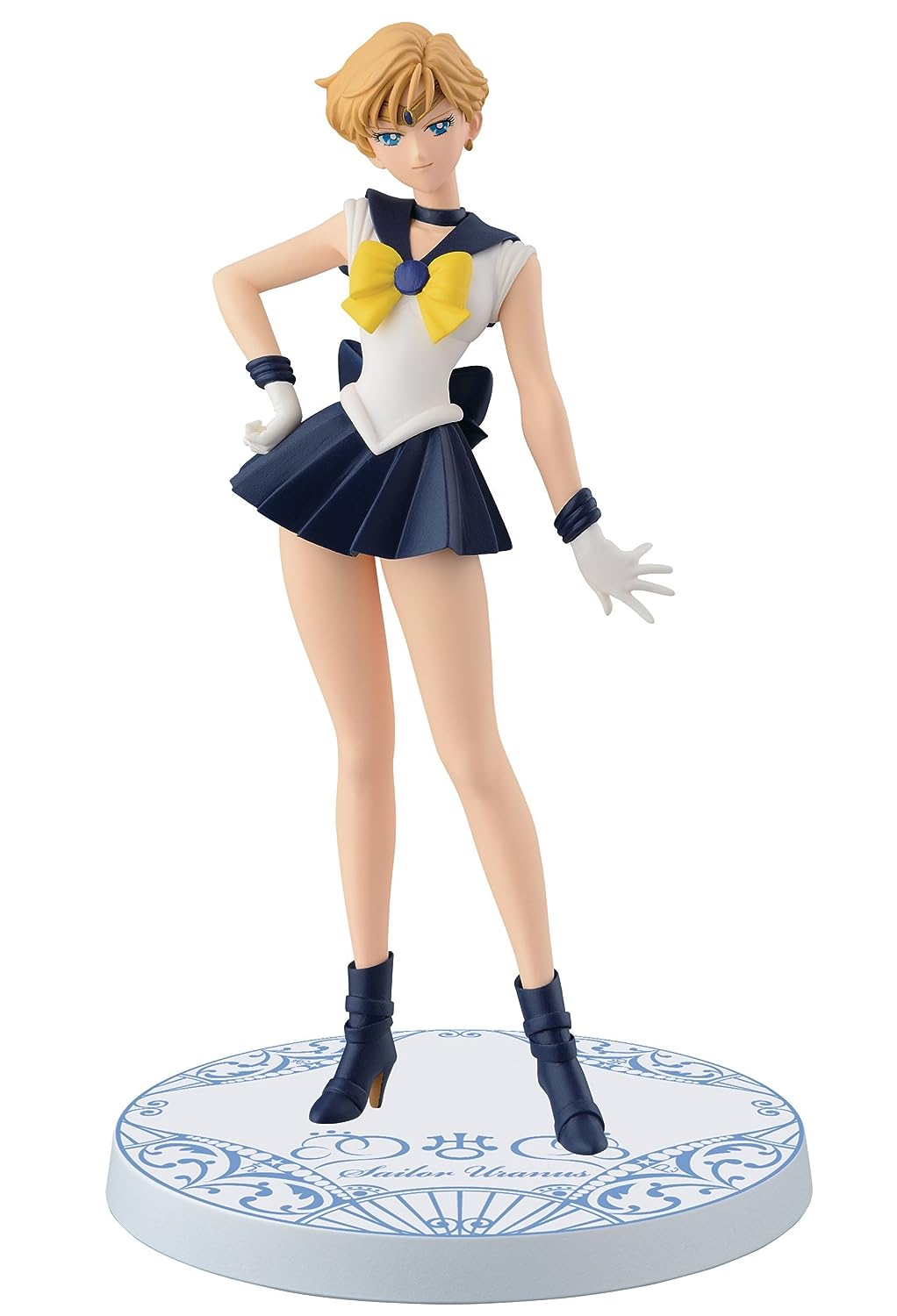 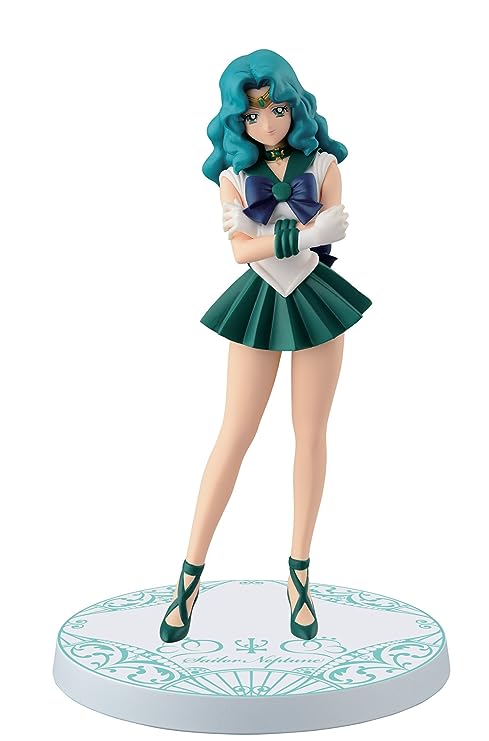 Sailor Uranus & Neptune statues that I totally don’t own.

A Uranus/Moon-themed episode, as Haruka shows off her Motocross skills, but is stuck fighting the monster when Neptune is beaten very quickly (like, before the Act Break, even). Kaolinite does the “I’ll kill your friend if you don’t stop fighting” thing, but then Sailor Moon uses the GODDAMN TIARA to cut Neptune loose! Neptune is feared dead, but Uranus appears to coldly abandon her partner- when Sailor Moon gets angry over this, Uranus points out a promise they’d made- to not give up on their mission, even if it endangered the other. The two are tied together by the Daimon (a silly purple duplicator who can turn into tires), commiserating a bit after a tiny portion of characterization, but it doesn’t go deep enough to REALLY dig in.

What we do learn is that Uranus reveals the nature of “The Silence” to Moon (basically, it’s Armageddon- the destruction of everything), points out the importance of their mission and their willingness to sacrifice some in order to save the world, and more. Moon, to her credit, REFUSES to allow Neptune to die, and when they trick the Daimon/s into splitting the chain that’s binding the two Sailors together, she rescues Neptune by BODY-CHECKING Kaolinite (who is getting physical for the first time ever, revealing Prehensile Hair as a power), and the two Sailors mop up the villain.

OH MY GOD ANOTHER REI ONE. And it’s got YUICHIRO, too! He’s worried over Rei pushing herself so hard to comprehend the ill omens she’s getting about The Silence, but can’t get through to her. Usagi meddles (as she does), and is convinced that Rei’s concerned about the idea of MARRYING Yuichiro, because of course that’s the conclusion Usagi comes to whenever a girl appears restless and obsessed. However, Yuichiro is shattered when he sees Rei “flirt” with Haruka, mistaking Haruka for a handsome boy (he misses Rei using a “good luck charm” he gave her to keep her hair manageable).

WOW the girl’s study outfits- Rei is wearing a red miniskirt, and Makoto is dressed in a green qipao of all things, which is hugging EVERY CURVE, showing off her trademark “talents” more than any other time I can recall. God BLESS this director… I mean, um, TACKY. Yuichiro is SO devoted to Rei’s happiness that even though he’s heartbroken, he fights for Rei’s honor when he sees Haruka with Michiru- Haruka easily sidesteps all of his clumsy, enraged attacks, but Rei is disgusted at his stupidity. This causes him to abandon the Shrine and leave, which now upsets REI, because she’s still fond of the big dummy (there’s some great stuff here about how someone she’s always relied on may now be disappearing from her life, and that upsets her even though she doesn’t love him). The girls convince her to chase after him, and of course a Daimon attacks. Mars actually DOES THE BEST, stunning it with her Magic Super-Paper, and Sailor Moon finishes it off. Probably the least help the girls have needed since the start of the season.

In the end, Rei takes care of Yuichiro’s injuries with the same ribbon he gave her earlier, but teases him for the cheap gift, teases him AGAIN for “picking a fight with a fragile young lady!”, then calls him a scatterbrain and a dummy, while demanding he lean on her when he walks. UGH THAT GIRL AND HER PERFECTION.

Wow, one-hundred episodes in. And it’s a HUGE focus on Minako, to the point where the other girls barely get a few lines each! That’s CRAZY- poor Mars, Jupiter and others have to share tons of time with Sailor Moon! Minako has a chance encounter with a boy from the school volleyball team, and he nervously makes some REALLY obvious attempts to see if she’s open to dating him (“Do you have a boyfriend?” “When I started on the volleyball team, I had a huge crush on you. But you were much better than I was at the time, so I decided to wait until I made the regular squad” “I could only date a girl who was into sports like I was. Are you not going to rejoin the team?”). This makes Minako VERY introspective all of a sudden, as she’d quit the volleyball team to start her super-heroics, and is now realizing what kind of a normal life she’s given up.

They do a really good job of making the silliest of the characters into a much more well-rounded figure here, as she plays off her fears of abandoning a normal life with jokes and anger, “jokes” about quitting the Sailors to the others (“just kidding”, she says), then goes off on her own. Naturally, Haruka shows up, but her advice is more or less “I’m happy with who I am, so I don’t regret giving anything up”. Minako comes to talk to the boy, but it turns out HE HAS A GIRLFRIEND.

Sailor Venus gets one of the more bitching “solo shots” here, as she deflects the Volleyball Daimon’s “Exploding Ball” attack by using her trademark “Serve Return” (recognized by the boy, Asai). She basically confesses to herself that “I am a Sailor Guardian, and there are things that only I can protect”, accepting her role in life. And in a cute moment, Artemis (who’d been flabbergasted by her behavior thus far, not understanding the teenage girl mind) gives her a bouquet of roses and asks “will you be my date tonight?”

A really fun set this time around, with some great character dynamics from Ami, Rei, & Minako! The only real plot advancement was learning that the Holy Grail is meant to prevent “The Silence” from happening, but not bad for a four-episode stretch of filler!