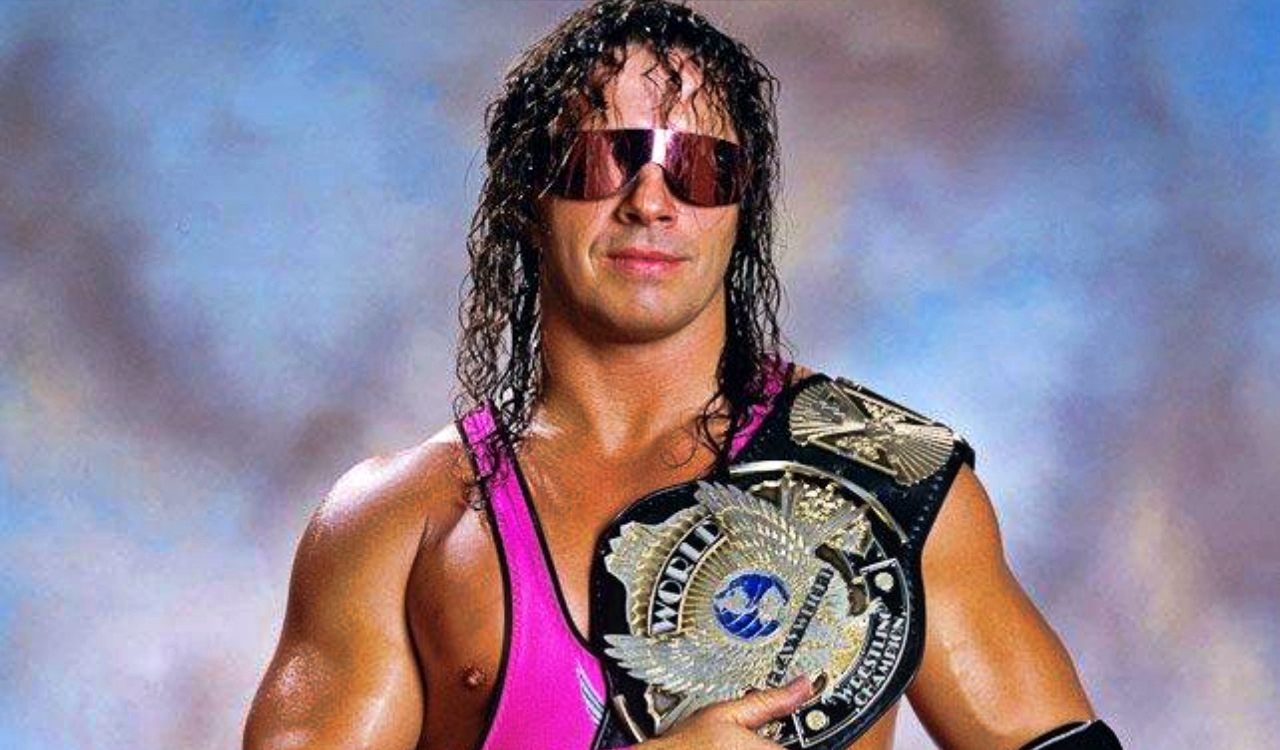 So the dominant, powerful Raw Women’s Champion Asuka is pants-shittingly afraid of Alexa Bliss, as if the former were Kamala, and the latter were The Undertaker.

This is why I have problems with you, WWE.

I haven’t really cared for The Fiend ever since his first matches with Seth Rollins when he ignored all oppositional offense and basically made the rest of the roster look irrelevant. Why should I care if Matt Riddle is talented and funny if there is a guy elsewhere on the card LITERALLY NO-SELLING DEATH BY ELECTROCUTION?

While The Fiend has been a BIT better ever since that Rollins program (finishers are now keeping him down for a 2-count, whereas he was kicking out at ONE from multiple Curb Stomps; and he has lost a few matches, even if wonkily), if we are just going to make Alexa the female Fiend (Fiendmale?) then I am going to get very tired of this gimmick straight away again.

I am hoping–but am sure I won’t see–the storyline here be that Alexa wins the Rumble and challenges Asuka. The Road to Mania is Asuka overcoming her fear and her clean loss to Bliss and then beating her at WrestleMania to punctuate her title reign (before they have her lose the belt in another month to Charlotte).

Speaking of which: TRY TO IMAGINE any reality where WWE books Charlotte to be terrified of Bliss and that easily vanquished by her. You can’t, because they never would.

THOUGHTS: I found the former Dean Ambrose to be quite hard to rate because everyone has always seemed to love the guy more than I do. He never really struck me as a perpetual main event dude, but people dig him. He has a pretty plain look; nothing is particularly bad, and he isn’t tiny or anything, but he’s not wildly memorable, either. He really is just a guy, albeit one in really good shape. I put him JUST on the plus side of average because he can really emote with his face.

Talking has always been Dean’s undeniable strength, though. He is one of those talents who really seems to believe everything he says, and it all seems to come from the heart. Everything is natural with Mox. Even when WWE was giving heel Ambrose absolute garbage to deliver, he made it as good as anyone would have been able to. He also has this inherent animalistic charisma where you can really by him as a vicious guy who would rather maul you than let you back him into as corner.

Personally, I think Jon is good-not-great in the ring. He doesn’t necessarily have BAD matches, but his best matches tended to come back in his Shield days when he could have wild brawls as part of one of wrestling’s hottest acts. He is much better at brutality than he is technical wrestling, but it’s a good niche for him.

Mox with a 21/30 feels about right for me, as I always saw him as a guy who can slot into the main event scene, but should be more at home doing the story-driven bloodfeuds in the upper midcard.

LOOK: 7. Mox is a *surprisingly* big dude, and he’s in the exact shape of a guy you don’t want to mess with at a bar. He’ll smash a bottle over your head and leave with your girl

CHARISMA: 7. He gives really good, believable promos, but he can also tend to ramble on far past the point of entertaining.

THOUGHTS: 21.5. To be honest, I’m not the biggest fan of Mox, and I was not super excited (to say the least) when he came to AEW to be their first non-EVP Ace, but he really has grown on me. I still don’t think he’s a perennial main eventer, but he’s an excellent upper midcarder perfect for short stints at the top. He’s not a guy who needs a belt to be over.

THOUGHTS: See? I’m already regretting not giving Shawn and Bret a 6 in Look. Or maybe giving Seth a 6 is too high. But Rollins is BUILT–Crossfit Jesus, indeed–even though he isn’t a giant. You know what I miss? That little blonde streak in his hair. It was so damn distinctive and gave him something all his own. He really should bring it back.

Seth is one of those guys who has DYNAMITE heel charisma, but just can’t put it all together as a babyface, often coming across as a bit forced. Also, his somewhat nasally voice more lends itself to being a snotty heel than a hero. He definitely seems to feel more comfortable as a villain, though, and I can’t help but wonder if WWE will ever go babyface again with him for anything resembling the long-term. His last face run ended in the fans turning on him, allowing him to embrace his inner antagonist once again.

Rollins is brilliant in the ring. No two ways about it. He is breathtakingly athletic, and he has a great moveset full of stuff that looks so damn impressive. A Phoenix Splash. One of the better Frog Splashes you’ll ever see. The Buckle Bomb. The Superplex into the Falcon Arrow. Oh yeah, and to say nothing of one of the best finishers in all of wrestling, the inconsistently named Curb Stomp. Rollins has a bit of an undeserved reputation for recklessness giving injuries that guys like Sting, John Cena, and Balor have gotten from him, but of those, only the broken nose to Cena was strictly Seth’s fault. And if a guy like Roderick Strong did that, fans would say “Look how hard hitting he is!”.

A 22.5/30 for the former Monday Night Messiah is good. He is a main event talent as a villain, and kind of obnoxious as a hero.

LOOK: 7.5. Rollins is a *tremendously* good looking guy (although a bit of a bootleg Alex Shelley 😉), in ridiculous shape. If through some incredibly strange and convoluted series of events a supervillain was slowly lowering me into a vat of acid and the only way to save me was for a pro wrestler to run a triathlon, I’m picking Rollins to save my life all damn day.

CHARISMA: 7. Much like Randy Orton, Seth is a born heel; and asking him to go against his nature should be a criminal offense.

THOUGHTS: Roman is one of the smaller Big Men you will find in wrestling history, but in an era where talent is smaller on average, he looks damn good compared to his contemporaries. Also, in addition to being imposing, Roman is an objectively attractive and alluring dude. His is not a look you are going to forget if he vanishes for a few months. He has such damn piercing eyes. And the recent loss of his Shield-era vest has been a boon to him because now everyone can see his powerful physique.

Roman was fairly famous for YEARS for his stunted, one-dimensional promos. He was often given garbage to work with (“sufferin’ succotash”), but he couldn’t spin it into anything believable, either. When given freer reign to combat John Cena on the mic, Cena embarrassed him on the regular… in a program designed to get Roman over! And then… WWE finally let him turn heel, and Reigns has shown an air of sheer menace he never had before. He positively radiates earned cockiness in his newer Head Of The Table persona, and his work is MUCH more magnetic now.

And much the same could be said of his ringwork. Roman used to be a solidly carriable talent whose best matches were because another guy brought him there and the environment was right. But as a heel, Roman has turned his ability WAY up, and now delivers some of the best slow-on-purpose matches I have ever seen. He doesn’t stall. He isn’t milking time. He just comes across as this inevitable force that you can only slow down, but who knows will get you nonetheless. I had no idea Roman had this level of work in him, but his matches are can’t-miss for me these days.

I have Reigns as a 22.5/30, but rising fast. We are still only a few months into his heel reign of terror, but everything he has shown so far marks him as a guy who has finally become what WWE knew he could be. If he keeps up this pace for a few more months, his charisma and ringwork could improve even further.

LOOK: 8. Apart from his “piercing eyes”, Roman has a great build and dope tattoos.

CHARISMA: 6. He’s… okay. Double R was pushed down our throats too hard too quickly, but that’s not his fault. Imo, his promos are the polar opposite of Mox, in that I don’t believe a damn word he says

THOUGHTS: 21. The least of The Shield, but not for a lack of Vincian effort. If all I’ve heard about his recent run is true, you can expect this number to go up a couple points

THOUGHTS: The first of the Four Horsewomen to get the ranking treatment (and I’m sure we will do them all in time), Bayley starts us off with a 5 in Look. As a babyface, she had a distinctive get-up and hair style, but since her heel turn, she’s pretty much Just Another Person. She isn’t specifically memorable, but she’s not got a bad look, either. She was just more flavorful as the Hugger.

Babyface or heel, Bayley has charisma to spare. She went from being one of the all-time great pure babyfaces to being a stand-out insufferable heel with no setbacks at all. It was as easy as flipping a switch for Bayley, for whom delivering promos and connecting with crowds is as easy as walking down the street is to you or I. She has that great in-ring personality, too, where she was relentlessly supportable as a hero in peril, but also so damn snide while working the heel heat.

Bayley had my match of the year back in 2015 (was it THAT long ago?) for her Takeover: Brooklyn encounter with Sasha Banks. She and Sasha have flawless chemistry (their 2020 Hell In A Cell match was high up in my MotY rankings for that year, too), but Bayley manages to have at least god matches with everyone.

Rounding out at 21/30, Bayley is at LEAST as good as Jon Moxley! To be fair, I’d rather watch Bayley than Mox most days, so I’m not even being facetious there. She’s a definite main event talent when the women are allowed to shine.

LOOK: 6. She was cute as hell as a face, and her current SuperKaren look and attitude is really fitting. Plus she looks like a chick that can throw hands when she needs to

CHARISMA: 8. She was *tremendously* over as a face, and incredibly annoying as a heel

RINGWORK: 7.5. Bayley can GO when properly motivated and has the right opponent, but I’ve also seen her phone it in a few times

THOUGHTS: 21.5 seems fair for her place in the overall state of women’s wrestling

That’s another week of The Bret Hart Categories in the books! Hope you enjoyed it!

Until next time… I’m going to be practicing changing my clothes with all the lights off. Spooky!

2 thoughts on “Bret Hart Categories -The Shield Edition (and more!)”