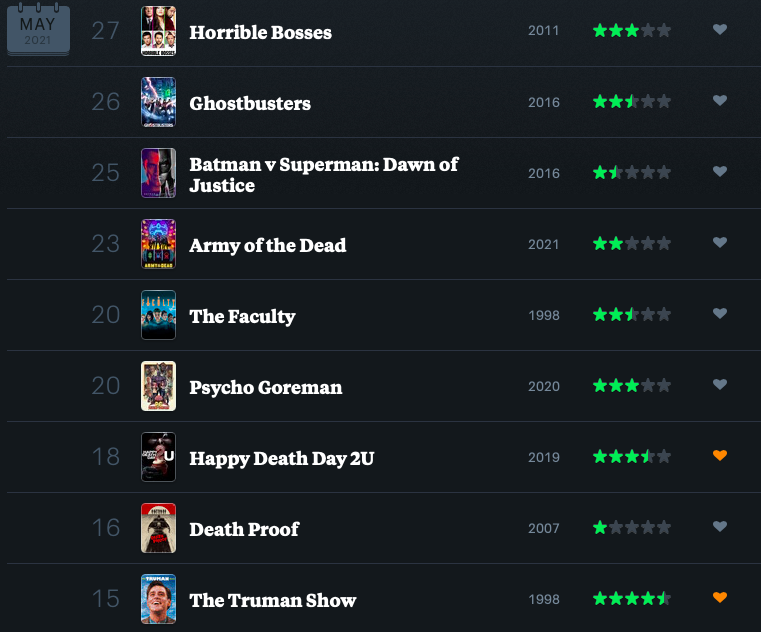 For the rest of this month’s Entertainment Recommendations, check out my earlier post HERE.

I, uh… I usually meander on a bit here, but I just got back from a jog and I am very sweaty and hot. So let’s just get into the fun, right? I still have to finish packing and shower and go to bed early!

Oh, this is not really anything, but on my jog, I caught an Yveltal on Pokemon Go! Thanks for inviting me to the raid, rando Pokemon Go friend!

Nine movies to wrap up the back half of the month isn’t bad, and it brings me to 80 on the year! Eighty in the first five months is a pretty decent pace, and I’m kind of proud of myself. Because sitting on my ass for two hours at a time is… an accomplishment? I don’t know, man. I DO strive to watch more movies, so it feels like I’m meeting a goal regardless.

I SHOULD be putting that effort into writing, but… I don’t. So… Movies.

I mean, I write movie reviews on my Letterboxd, so that’s… sort of a thing?

It’s always a bit sad when the batch starts off as strong as it’s ever going to get, but I hadn’t watched The Truman Show since it was in theaters, and it was far better than I remembered! Just a fantastic movie that, thematically, was ahead of its time, even if some of the jokes and conventions feel somewhat relic-y. But you have a movie that is basically a philosophical thought experiment, wrapped in a horror movie, covered in a comedy. I loved it.

I continue to find Quentin Tarantino to be the most uneven and inconsistent filmmaker in Hollywood, as I watched Death Proof, a movie that manages to make plot of Kurt Russell Murders Hot Chicks With His Car tedious and boring. Imagine having that as a plot and then thinking “And now I’m going to do nothing with this!”.

I had a Zack Snyder mini-spree that earned a grand total of 3.5 stars out of 10, and honestly? At this point, I worry if I rewatch Dawn of the Dead or 300 or Watchmen that I won’t like them any more because I’m so over his tricks and his fanbase. Army of the Dead was a two and a half hour movie that had no business being more than 100 minutes; Batman Vs Superman (Ultimate Edition) is the plots of four different movies crammed into one, and none of them is given time to matter.

BvS actually went down on this go around. I previously had it as 2/5, but on this watch (my third overall and second of the Ultimate Edition), I found even less joy in it. What’s weird is that the movie has two truly spectacular scenes (Bruce Wayne in Metropolis during the Man of Steel fight; all of the tension and boiling over build up right before the scene with Superman in front of Congress), but the rest of the movie works so hard to undo that good will.

Army of the Dead… look, I’m sure you’ve heard all about the massive plot holes, unresolved teases, and unfocused writing. But also… it’s just bland. It’s not scary. It’s not funny. The action is good, not great. It really had no idea what it wanted to be.

I probably overrated Horrible Bosses based on how funny and charming the three leads are, but the writing was pretty archaic (homophobic humor and jokes about being raped in prison). I wish they’d been given a better screenplay to work with.

The 2016 Ghostbusters reboot was neither as bad as people will tell you nor as good as others wanted it to be. It’s just an OK movie. It struggles with some really lame attempts at humor for a while, but Leslie Jones basically saves most of that as well as she can, and the story is interesting. But it DRAGS for chunks at a time; the first act is basically unwatchable.

Along the lines of the “I Laughed, But Was It GOOD?” feeling I had for both Ghostbusters and Horrible Bosses… Psycho Goreman was a cute movie with some good wit, but it felt like it was just trying SO HARD.

Not too much to note here, but I did start rewatching my favorite television show of the 2010’s, The Good Place. Having finished up Schitt’s Creek over the last few months, I wanted to dive back into this gem and see how they stack up. It’s a really hard call; they are both so damn good.

Just as a little sneak preview: I’m reworking my Top Ten Sitcoms of all time list for this rewatch and my recent viewing of Schitt’s (and the fact that when I last made that list, I had not watched Community yet, either). They will both place… highly.

EDIT: I did not end up keeping on with 428 Shibuya Scramble. That just got really boring really quickly. I felt like 95% of the game was just pressing “Next” until the game gave me one choice then told me I failed. It seemed like it was going to get convoluted quickly with its premise of Play Until You Lose, Then Make A Difference Decision Somewhere. I greatly enjoy choices-based adventure games, but this was too hands-off even for me.

I had another game night with some other friends who brought over this game, Cash N Guns. It was decent enough and has some interesting strategy to it. I feel like it’s a game you could never really master because as you develop a strategy, the people you play with will figure out your tendencies and plan against you.

Mostly I spent the game thinking “How could it ever benefit me to point the gun at MYSELF”. I never figured out a way. Maybe next time! I really want to just confuse people.

We also played Uno that night because UpUpDownDown has had me wanting to play Uno for a solid god damn year now. My wife was NOT a fan of the 7’s And 0’s rule–and the one game we played last for-bloody-ever, but I don’t care: I still love Uno.

And that’s it for May! How June look when I spent most of the first ten days or so either on vacation in North Carolina or on vacation in Atlantic City? Hard to say! Don’t expect too much, I guess.