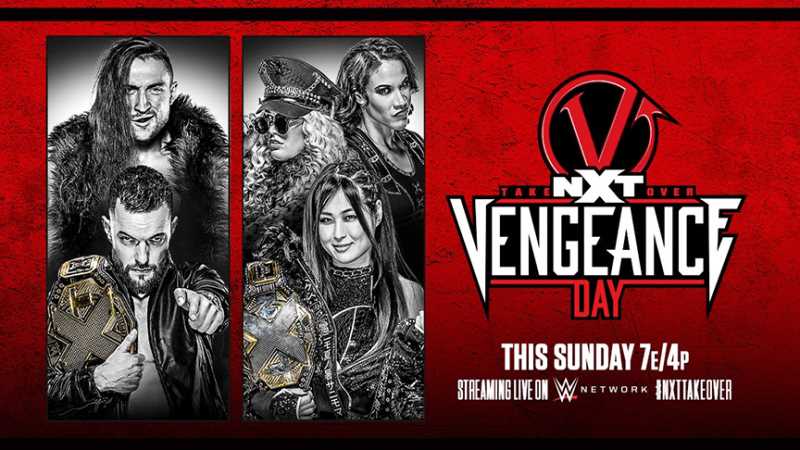 I feel like I start every NXT Takeover review the same way: by gushing over how much I love NXT.

But you know what?

WWE just has way too many hours of programming, but still can’t come up with more than one or two compelling stories at a time. AEW is high quality wrestling, but I often am not on board with their booking decisions, and it leaves me feeling disappointed. NJPW is just not easy enough to watch. Impact wavers in its quality from show to show.

But man… NXT. NXT is this constant reminder of, if not why I started loving wrestling, then why I never stopped loving wrestling. The talent: unimpeachable. The matches: almost always a blast. The characters and stories: pure joy.

On Valentine’s night, NXT offered up their next NXT special, NXT Takeover: Vengeance Day. It’s… not a great name. I think this is why I sympathize with NXT so much! I am a writer, but naming things is hard. Vengeance Day, sure. I mean, to be fair, St. Valentine’s Day Massacre IS already taken.

(Then again, so is Halloween Havoc and The Great American Bash, but… whatever)

There were a lot of stakes for V-Day this year. TWO Dusty Cups to award! A North American Title match! An NXT Women’s Title match! An NXT Title match main event! So while the episode may have been a touch short on good ol’ fashioned rivalries, it wasn’t so in terms of shiny prizes to fight over.

So how did everything shape up? Let’s see!

The Finals of the first ever Women’s Dusty Cup kicked off the show with two teams I really wanted to see both win. To the tournament’s credit, they got the Finals absolutely right! Can’t knock that.

I am an enormous mark for Ember Moon; I think she’s just the best, and it feels like it’s been SO LONG since she had a real accomplishment. That said, Dakota Kai has never had one! I guess it’s too bad they weren’t teaming here so my loyalty didn’t feel split.

This one started a bit sloppy–Shotzi is a terrific character, but she lags a bit behind the other three in terms of talent–but it regularly shifted up gears until it became a full-throttle affair. Raquel and Dakota won, quashing my Ember dreams, and really… how far has Raquel Gonzalez come in such a short amount of time? She’s a STAR.

Gonzalez and Kai now have a WWE Women’s Tag Titles shot, and by god, I hope they win it. NXT needs those belts far, far more than the main roster does.

KUSHIDA’s shot at the NXT North American title followed. And I have a few complaints here I guess, but the first one is that the North American Title has never really… worked for me. I always expect it to feel like the Intercontinental Title did back in the 80’s and 90’s, but it far too often feels like the Intercontinental Title of today. It hasn’t really helped anyone, and it just kind of bounces from dude to dude without leaving an impact.

I was hoping KUSHIDA could really take a run with the belt and make it prestigious, but… it was not to be. He lost to Johnny, which is fine, I guess, but he lost cleanly, which I don’t think was ideal. If Johnny was to go over, The Way should have paved the…….. path.

The match was great. The match was always going to be great. Heel Johnny Gargano may not be quite the wrestling force that babyface Johnny was, but come on… that’s like saying groggy Einstein with a hangover wasn’t as smart as regular Einstein. It’s still pretty friggin’ good.

Johnny’s heel character work is still perfection, so perhaps he can bring the full prestige to the NA Title I kind of wanted KUSHIDA to.

As a note: I really enjoyed the subtle Lumis-kidnaps-Theory bit in the background during Johnny’s entrance. Full on “does this rag smell like chloroform” there.

The Finals for the Men’s Dusty Cup had some real work to do with me because honestly? I totally skipped out on the NXT main event this past week, which was the Grizzled Young Veterans vs Tommaso Ciampa and Timothy Thatcher. It seemed like a foregone conclusion! Ciampa and Thatcher had a storied build to their union, whereas NXT has never given me any reason to care about the GYV. They make vanilla ice cream seem daring and exciting.

At first, I was a bit annoyed. If you are going to put GYK here… why not another team? Use Breezango here! I adore Breezango. Or Legado Del Fantasma. Heck, Dain and Maverick are fun. But GYV? I spent the opening minutes of this match struggling to care. It wasn’t Gibson and Drake’s fault; NXT just never made them seem like a real threat to anything.

And then, you know, they just had a bloody banger of a contest. I say this with all of the praise in the world: this match gave me flashbacks to DIY vs The Revival. It felt like their epic battles did, and I was reminded of how much time it took for The Revival to grow on me, too. Both teams did WORK here, and okay FINE, NXT, you win again. Now I like both of these teams. Are you happy now? Is that what you wanted?

In-between matches, we were treated to a Cameron Grimes music video, and it brought me approximately 4000% more joy than I had in my life before I’d seen a music video about Cameron Grimes being rich. If The Beverly Hillbillies had a rap/country opening detailing how they found black gold, it would have been just like this.

I neither know nor care where this angle is going. I’m getting in the car with it faster than if it had FREE CANDY painted on the side.

If you had hopped into KUSHIDA’s DeLorean and went back to me yesterday and said “One bout at Takeover is going to be a relative disappointment; guess which one”, I’d have rattled off literally EVERY OTHER MATCH before this one. It just seemed so unlikely to not be solid.

And solid? Sure, I guess it was “solid”. But it also was one of those affairs that moved up to third gear and just… hung out there. Io is in the Best Wrestler Alive Today, Regardless Of Gender discussion, and Toni and Mercedes are both plenty good. But this just felt a bit stunted. Whereas KUSHIDA/Johnny and the Men’s Dusty Cup had several moments each where I thought they were about to end, but didn’t, this one seemed to finish up before I was ready for it to.

If this had been an all-out sprint for 6-8 minutes with a sudden, conclusive finish… sure! I’m all for epic matches occasionally being shorter so we don’t take the openings for granted. But this felt like it was building… building… and, oh, it’s over.

This was good. Just… good. But at twelve minutes, it felt too long to be a hustle, but too short to be an epic.

Pete Dunne and his fingers gimmick, man. It’s brutal and it looks great, but I will never not laugh at it. You’ve got powerful grown men and women out here trying to break your arm or tear your knee ligaments or wreck your back or concuss you into oblivion, and there’s this dude out here playing the world’s worst game of “This Little Piggy”.

Dunne’s great. This match was great! The fingers thing just tickles me, though.

Real question: Is Finn Bálor the best in the world currently? He is having a spectacular run of matches and character work ever since he returned to NXT. It’s weird to think this wasn’t the recent plan for him; if Karrion Kross hadn’t gotten injured, we wouldn’t have Finn and his Opponent Of The Month actively trying to bludgeon each other in a ring for a world title. But you see the work Bálor is doing, and it feels like it was always meant to be.

Finn won another stellar Finn match–ho-hum for him–and then was victim to an Adam Cole heel turn to finally break apart The Undisputed Era at a time when it really wasn’t called for. There was a definite build a ways back before they went face where a UE dissolution felt imminent, but it got patched up and then BAM. Swerve break up all this time later.

Kind of reminds me of The Shield now that I think about it…They did something similar with their break-up after an extended tease was resolved.

There’s nothing really here at the moment, so it will be curious to see where Adam goes. What is the impetus for this? What will Roddy do? If nothing else, I am curious.

Oh, NXT. Even when you do me wrong, I still make excuses for you. Maybe this relationship isn’t healthy, but I can’t stay mad at you.

Not that this show was “wrong” by ANY stretch. Every match except one was superb, and even what I didn’t love (the heel turn) has me dying to know what’s next like it’s a new episode of WandaVision.

While we are waiting for Cole’s explanation, check out SWOProductions, where we have Movie Drafts and review of Pop-Tarts of all things. And so much more with new articles every day!