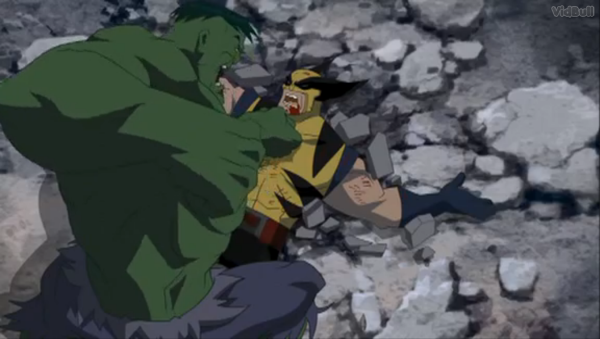 Who would win in a fight? Superman or Goku?

How about the Flash or the Hulk?

And who would come out on top if Dr. Doom pitted wits against Brainiac?

(Sidenote: “Brainiac” is one of the those names that have existed in comics lore for decades that we all just accept when we really shouldn’t. Really? An interstellar, cunning alien/robot who uses his intellect to collect dying cultures, and we all just let it go that his name would be “Brainiac”? Yeesh)

The value and relevance of such questions is one of the most controversial topics in all of comic fandom.

Those opposed to such matters view the idea of arguing over who would win in a fight as everything from childishness to the lowest form of fan fiction. They argue that simply looking at comic book characters as meat suits with powers denigrates the entire medium and misses the scope and capacity of what comics can truly be. So, to them, the mere concept of imaginary versus segments actually hurts all of us! When the world view of comic books fans is a simplistic thought of two idiots screaming at each other over whether Wolverine could defeat Batman in a street fight, it can be hard to convince people that deeper books like Y The Last Man or Sandman exist.

When extremely insightful and powerful writers can join together with brilliant artists to create tales of wonder in a unique medium that challenges a reader’s concept of how storytelling can be portrayed, isn’t it an insult to those talents to reduce their work to argument fodder like “that portrayal of this character makes him look too weak based against the average, and it really shouldn’t count!”?

I mean, yes. Yes, that is an insult. But bear with me! I’m getting to my points!

Fellow comic fans have noted that one of the most important things about comic books is that they can tell a story in a way that no other form of media can. The combination of still art with the written word and a reader’s imagination filling in the blanks forms something unlike anything else. But! That cuts in a different way, too.

Comic books most often feature characters with otherworldly, fantastic, and imaginative powers engaging in [sometimes nuanced, sometimes not] struggles of morality and justice. What primarily separates comic books from other mediums are the plethora of powers and costumes involved. So the idea of mentally “pushing your action figures together” is a very comic book thing to do. Fans of television never argue “Who’s the better office worker, Jim Halpert or Drew Carey?” Even as far as similar movie cinema goes, it will just boil down to the extremely subjective and volatile “Star [Wars/Trek] is so much better than Star [Trek/Wars]!”. There’s no creativity, just a vitriolic passion about which is “better”.

What’s more, these versus debates are incredibly popular. Find any relevant comic book discussion forum online, and odds are that not only will they have an entire sub-forum dedicated to such scenarios, but that that forum will be the most popular and busy on the site. There are an almost unimaginable number of characters across all of the publishers of comic books in the world, so the potential for new topics is endless. You can debate Mac vs PC preference until you die, but it never changes much. But the realm for comic fights is vast! And it changes every time a new issue comes out.

But, okay fine, arguing about comic book fights can also be volatile (Oh the slurs I’ve seen!) and somewhat subjective. Just because they are a different type of argument (or even a somewhat specific argument to comics in general), how are they good in the face of the arguments against them? They are still just an idiotic missing of the point, right? Maybe not!

Going back to how comic books operate on a different fundamental level than movies or novels, they rely a lot on the reader to “fill in the blanks”, as it were. Pages are made up of still panels, and there is a constant stream of gaps in the information a reader receives. In some panels, depending on what the writers and artist are trying to show, maybe only a portion of an image will be given to the reader. This requires the reader to complete the story in their head to make everything fit together. Now, generally, the amount that a reader will have to do this is minimal if they are just engaging in the story for its own merits, but to the fan who is reading to determine a fight, it becomes more important.

The break in every panel during a conflict becomes important, and it’s up to the reader to determine how all of the action got from point A to point B. If Hulk punches Thor in one panel, but the next panel shows Thor striking back, does that mean that Thor was completely unaffected by Hulk’s shot? Is there an assumed regrouping that Thor had to get too? Are there clues in the artwork or the speech bubbles that can answer this? When you are reading comics for personal research, you are more invested in completing every break in information that book has, and this relies on you to gather all the evidence at your disposal and create the most accurate conclusion (or, as is usually the case, the conclusion at which you want to arrive! But hey, that’s still data gathering and interpreting).

There’s also–and, sigh, I hesitate to get into this because I kind of despise when people use these as crutches–the idea that “[Character X] was going all-out, while [Character Y] was holding back!”. Again, this is an interpretation of presented information, matched against other appearances and clues in the work to reach a conclusion that the book itself may not spell out. Critical thinking, yeah!

This ties in closely with critical thinking, so I won’t spend as much time on it, but I also wanted to have three points to hit because three is more impressive than two.

Obviously, if you are reading a story, you should read closely. You absolutely must read most works by Neil Gaiman or Alan Moore closely, or you will miss so much! But the lay reader probably assumes when Ant-Man is duking it out with Ultron that you can put your brain into Easy Mode and just breeze through. Those are the fun filler that allow an artist to show off, but they aren’t often integral to the tale at large.

But if you are reading because you enjoy versus debates, you have to read these scenes exceptionally closely! How do the characters react when assaulted? How do they think on the fly? What is the collateral damage of each strike or blast? All of these matter if you plan to defend or attack a character in a conflict. And as you read the fight scenes closely for these nuances, you learn to read comics as whole closer. Then you see the details in the background or the subtle foreshadowing in the dialogue in books that aren’t even about brawls. BAM! Figuring out if Spider-Man’s shockwave can knock over lampposts just made you a better reader!

Obviously, the Hulk would defeat an anaconda effortlessly.

But the Hulk has been knocked out by an anaconda before!

Well, anacondas are mean and have their own horror flicks. But Silver Surfer is a cosmic, space-faring hero, and he absolutely could never be taken down by a dude chucking a brick at him.

EXCEPT YES HE HAS BEEN!

The point here is that I never would have heard of, much less read, the comics in which those scenes happen if it weren’t for battle boards! They inspire fans to read more comics, whether it’s to research their own points or to find holes in arguments against them. It’s my findings that people who engage in these discussions have read a veritable Mariana Trench worth of comics because they are invested in having all of the information possible at their disposal.

There are a lot of comics that I, personally, probably would never have read if not for discussions like these. When I started getting back into comics in college, online discussions about The Flash and his powerset made me curious about the guy who I thought just jogged about really quickly. Because of that, I started picking up The Flash, and Wally West became one of my favorite characters ever. All because people arguing online about fictitious fights got me curious about the character. It’s also why I started watching Dragon Ball Z.

So whether you are reading for ammunition, reading to refute opposition, or reading because you are intrigued by the claims of others, versus debates will get you reading more books, both in and out of your regular comfort zone.

Whew! I believe you will find that the facts are simple: debating which comic book character can defeat another in a fight simply makes you a better person.

That is… unlikely, actually. I’ve seen these people. Many of them are about at the level of the lady in the last panel of the Y The Last Man page I posted up there.

But still! There are positives! And as long as you keep it friendly, it’s just a bit of fun. Comics can be many things, and that’s true, but a big part of what they are–what all media is at times–is escapism. If you can’t sit back and just imagine Green Lantern and Iron Man shooting blasts at each other for a while… what are you even doing with your life?

One thought on “In Defense of Battle Boards”