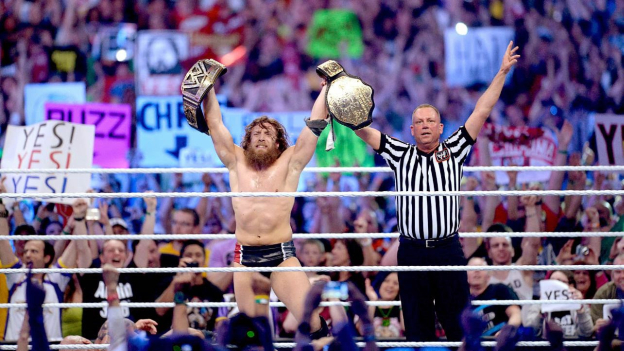 Given that some of our articles here at SWO Productions involve the topic of professional wrestling, I thought there might be some of our fans out there that aren’t as well versed in the terminology some of our writers might use to explain some of of the happenings this great field of sports entertainment has to offer.

Therefore, for today’s entry, I thought I’d deliver an illustrated guide of sorts of some of the major terms that you might encounter in some of our wrestling articles going forward. Now I will say before I begin though that some of this stuff just generally needs to be learned to know what we’re talking about sometimes. However, some of it’s just me going on & on like I tend to do. I’ll let you decide which is which…

The guy who writes the storylines, sometimes the boss of the company.

Vince McMahon is the owner and Head Booker of WWE, even though he really just okays most story lines. He’s the boss, in any case.

Losing a match in a scripted manner was colloquially-known as “doing the job”, since it was a wrestler’s job to do what he was told.

It soon got verbed into “Jobbing”, and guys who ONLY do jobs are called “Jobbers” (you know them as Barry Horowitz, The Brooklyn Brawler and what Jim Powers turned into- they’re guys who are usually local boys who lose to up & coming stars on TV).

A “Jobber To The Stars” is more common these days, and is a guy who will beat Jobbers, but still lose to any reasonable star. Examples include Koko B. Ware in the WWF, and guys like Freddie Joe Floyd, Bob Holly (before he got a push), and others.

Wrestlers aren’t REALLY fighting, so the fight is “a work”. A guy who bites down on a blood capsule to look like he’s bleeding is using “worked blood”, etc.

A guy who throws a legit punch that actually hurts threw a “Shoot punch”.

A few wrestlers over the years have done “shoots” for real, legitimately grappling their foes and winning (very rare nowadays), while others can “shoot” in interviews, throwing out legitimate points or grievances (this got REALLY COMMON in the 1990s).

Basically taking a legit grievance but using it in the storyline. Very popular in the ’90s again.

Guys would often complain about getting held back by others, or guys who legitimately didn’t like each other would be programmed against each other, thus getting fans “in the know” into it.

X-Pac made his big return to the WWF by ripping on his old bosses at WCW (“Eric Bischoff is shoved so far up Hulk Hogan‘s ass, he knows what he had for BREAKFAST!!”).

A legitimate wrestler who could defend himself.

NWA World Champions often had to be Shooters to protect themselves in case an opponent decided to start “shooting” and winning for real, because you can’t very well tell the fans that it’s fake and that’s why they fired some guy who just beat their champion.

A good worker can “Carry” a bad worker to a good match.

Ric Flair had the fabled “Broomstick” reputation meaning he could carry a broomstick to a good match (*** out of five potential stars in the fan-termed “rating scale”).

The true measure of a guy’s skill was how much HIGHER than *** he could get if he wrestled Flair.

Guys eventually came to be cheered for and pushed based off of their Promos as their in-ring work, as Hulk Hogan will attest.

A fan not “in the know”, who thinks it’s all real.

A derogatory remark of workers to modern-day fans (who ALL generally know the con). Basically they act like they’re in the know, when they really know nothing.

Wrestlers REALLY hate it when fans use a lot of “insider terminology” and use wrestler’s real names, and get this remark tossed at them.

A carney term (means “Fake” in Pig Latin, sorta) to refer to the general fakeness of the business.

Like “keeping kayfabe” is keeping the illusion that it’s all real.

“Breaking kayfabe” means revealing the con to an outsider.

Rarely shortened to “Face” except on the internet, these are the good guys.

A “Tweener” is rarely-seen, but usually picks one or the other.

In the 1990s, guys kind of dropped the distinctions and everyone started cheating and being nasty, but there were still obvious fan-favorites and bad guys. “Rudo” in Mexico.

Wrestling-code for “a wrestler who is going with the script”, ie. a fake wrestler. They usually call themselves workers.

A “Good Worker” is a guy who can have good matches, make others look good, and not hurt anyone legitimately.

A lot of smaller, faster guys are good workers, while larger guys can struggle.

Pretending you are hurt (this is an acting term as well).

Some guys “No-Sell” (Undertaker & Kane) as part of their Gimmick.

Other guys are just really bad at it or intentionally don’t act hurt to make themselves look better (too many guys to name).

Some guys OVER-sell (Shawn Michaels often did full-on backrolls and flips upon being struck).

Others can sell realistically, but just forget that certain body parts are supposed to be hurt after a while.

I consider Bret Hart the best seller ever, because he always looked LEGITIMATELY hurt.

Most other guys are just really good at making all of his opponent’s offense look great. For example, Ricky Steamboat was terrific at this.

Guys being trotted out and winning extensively are said to be getting “pushed”.

Pushes come and go, and some guys NEVER stop getting pushed.

The Cyclical Nature of the Business:

An old cliche (often trotted out by guys on top during eras that aren’t so popular to come up with a reason why they don’t suck) that the business goes through various fads. Each territory would tend to do this, so there’s some truth to it, though it’s largely because companies often don’t replace their tired acts soon enough, and so the fans don’t have anyone new to cheer for.

Generally doesn’t happen so much anymore now that there’s a steady revenue stream going, but it used to ax companies ALL THE TIME.

Becoming popular or drawing a reaction. A match can “get over”, as can a wrestler. A loud crowd reaction is called a “Pop”.

The bad-guy alternative. If the crowd boos, the Heel is doing his job.

Termed for the heat a bad guy gets that he perhaps SHOULDN’T be getting.

Basically, the fans legitimately hate the person and don’t want to see him, not just “hey he’s a bad guy- BOOOOO!”

So named for X-Pac, who’s weasely attitude and over-pushed nature caused him to draw MAJOR heat from the fans, chanting “X-Pac Sucks” even when he was supposed to be the GOOD GUY! TV Tropes kind of modified this over time, but basically it’s short for “the wrong kind of heat”.

Fans tune out, rather than tune in to see him get beaten up.

A storyline or event that occurs.

Like a “Contract Signing Angle” (contract signings always lead to beat-downs), or a long-running plotline.

A character with some kind of schtick, like how Big Boss Man had a cop/prison guard Gimmick, or Henry O. Godwinn was a hog farmer.

Many of these are rather goofy & cartoonish, especially in Vince McMahon’s WWF.

How guys bleed on TV.

They take little razorblades from their wrist tape and cut their foreheads quickly.

Some are more obvious with it (I’ve seen referees get caught handing the wrestlers the “gig” on-camera), while others are zen masters (Shawn Michaels can cut himself in mid-jump without anyone noticing).

One thought on “Jab’s Guide To Pro Wrestling Terminology”