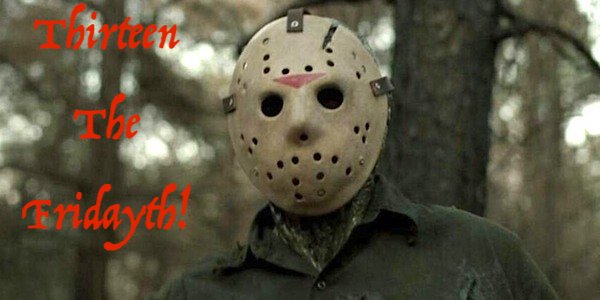 This is something I did last year during the infancy of SWO Productions for the Halloween franchise, and it’s something I kept meaning to come back to: a series where I rank all of the movies (or all of the ones I have seen) in a classic film franchise. I get a lot of mileage out of discussing my Halloween rankings, so I bet I can do the same for others!

To do the Friday the 13th series is obvious. I talk about that franchise ALL. THE. DAMN. TIME. So little introduction is needed here. It’s Halloween Spooky Time Month. I love Jason. Let’s get into it!

This is the Halloween: Resurrection of Jason movies; even in a franchise with some stinkers, this one stands out as being far worse than the rest.

There’s almost nothing nice to say about this flick. I mean, I guess Steven Williams is pretty rad as Creighton Duke? That’s it, though. Aside from that, you’ve got Jason NOT being Jason for 80% of the movie, a weird demonic worm that is “real” Jason, and lore regarding a Voorhees knife. No one wants this. No one ever wanted any of this.

It DOES work if, as I do, you believe that Friday the 13 canon ended at Part 8, and this is a movie about Jason within the actual Friday the 13th universe of parts 1-8! But even that is meeting the flick WAY more than halfway.

On the one hand: this is not a Jason movie. This is a The Hills Have Eyes movie that just happens to have a hockey mask killer. Anything else resembling Jason Voorhees and his mythos is barely coincidental.

On the other hand, this movie has MAYBE my favorite non-Jason character in a Jason movie. Travis Van Winkle as Trent is the REAL hero of this movie, even though he is played as an awful antagonist. Every nicety he tries to give out is rebuffed. Sam Winchester is rude to him, his friends break and steal his stuff, and his girlfriend just runs off with another guy.

He is also great at compliments; see: when he tells a woman that she has stupendous tits.

In a more fair universe, Trent would have killed The Jason Has Eyes and survived. And his friends’ next of kin would pay for all his stuff they ruined.

People like this movie, and I get why. It has Corey Feldman being pretty swell and really carrying his scenes. Say what you will about him now, he truly was a great child actor. And you also have Crispin Glover doing THAT DANCE SCENE.

But taken away from that, you are left with what might sadly be the worst executed Jason movie of them all. Professionally, this is BAD. The editing is horrible, leading to several confusing scenes, and the constantly baffling layout of camps in these flicks is never worse than here. I never have ANY EARTHLY IDEA where any characters are in relation to any others.

So I can see why others like it, but even when I’m giving these movies a pass for being what they are, this one still feels amateurish to me.

This movie is, fittingly, halfway between Parts 4 and 6. It has the low quality filmmaking of Part 4 combined with the tongue-in-cheek nature of 6. This Jason movie has POOP JOKES, guys!

It also has a lot of nudity maybe the most unlikable characters in any Jason movie, Ethel and her son.

Oh, and no Jason. Just Roy. It’s a weird twist, though actually a better one than found in the 1980 original. You could reasonably predict it here, whereas the original’s reveal is out of fucking nowhere.

Here’s what I love about Jason Taking Manhattan: Even in the best Jason movies, you have to wonder why everyone doesn’t just… run the hell away from him. Just run and run until you hit civilization. He’ll probably get bored and stay at his camp.

But in this movie, the protagonists are stuck on a boat with Jason, and that is very claustrophobic. There is nowhere to escape!

Until they, you know, escape on the lifeboat. BUT STILL.

There’s also two of the very best all-time Jason kills here: the one-punch and the sauna rock to the gut.

Past that, you’ve got a misleading premise, Jason finally going straight up MAGICAL because the filmmakers were too lazy to enhance the dread any other way, and when he finally does get to NYC, it’s kind of a letdown. So not great!

It was filmed for 3D! Are you aware of that? If not, you will be very soon into it!

WAY. TOO. MANY. 3D. SHOTS. This flick is full of stuff popping out at your face, and it gets so damn tiresome. Snakes and eyeballs and popcorn and harpoons yo-yo’s and just… so much.

If you can get past that, you have a perfectly likable Jason movie. The characters are fun, and there is some backstory added to Hockey Mask Jason.

Too low? Nah. This movie is good but also really overwhelmed by several of its successors.

The problem with this movie is that the killer, Pamela Voorhees, comes out of god damn nowhere. When you get that reveal, it feels like the movie was lying to you the whole time. She’s not even IN the flick until it’s time to reveal her as the killer.

(I mean, she ISN’T the killer; Baghead Jason is the killer, but WHATEVER…)

It does have Alice, who is one of the top two Final Girls on the franchise. She makes everything here just a bit better and is so damn sweet and cheerable.

Look, they gave us an actual, honest-to-god feature length film with Freddy Kreuger fighting Jason Voorhees. What do you want me to do in the face of that? Horror fans had been clamoring for that since 1993, and a decade later, they delivered. It was the proto-MCU teasing us with Thanos.

FvJ does exactly what it promises. It has Freddy fighting Jason multiple times in multiple scenarios. And it actually comes up with a decent story as to how they get together and why they are fighting. Even if the why pretty much boils down to “Freddy is greedy”. There is at least thought put into the plot. More than they really needed!

Katherine Isabelle has a role, too! Always a bonus.

Great one-liners. Just… Jason X embaced every single aspect of itself. “Guys, he just wanted his machete back!” “Yeah, that ought to do it” and more. This movie is just having fun with itself. After the HORRENDOUS Jason Goes To Hell derailed the franchise for 8 years, the series came back and didn’t try to go back to being scary. It just wanted to be fun. It’s an apology for the ninth outing.

If you can’t have fun with this movie, you might not have a soul. Just accept it! Embrace it for what it is. It knows the fact that it is the tenth movie in a franchise is dumb. It wants you to know that it knows!

Also, for what it’s worth? Look, let’s not be disingenuous here. There are multiple reasons to watch slasher flicks, and we all know what they are. To that end? This is the hottest cast in a Jason movie ever.

Through seven movies, Jason’s only competition was really himself. He was dumb, and therefore easy to trick. You didn’t go toe-to-toe with Jason; you just hoped to survive the maelstrom that is Voorhees. You needed to outsmart him or lure him into a trap to survive.

And it is for that reason that Part 7 is such a winner in the series… there is a full-on climactic fight scene!

Apparently dreamed up as “What if Jason could fight Carrie”, the seventh outing pits the Camp Crystal Lake Killer against a burgeoning telekinetic girl. The first half the movie drags at times (despite some good horror cinematography), but when we get to the conclusion… wow!

Tina’s battle with Jason rages across the Crystal Lake area as she really brings the hammer down, but he just won’t… stop… coming.

I love that this one just went “eh, that’s enough horror; I’m an action movie now!”

Years before Jason X, we had Jason Lives, the first film in the series to really say “Hey, you know these aren’t supposed to be serious, right?”

Part 6 is the perfected blend of humor, horror, and action in the franchise. We get the silliest scenarios (Jason vs the paintball team), some good scares (a scene where the camera pans up to follow a character and Jason is just THERE), and a brilliant conclusion (Jason and Tommy wrestling in the lake while THE WATER IS ON FIRE).

This one is just the most fun, most complete movie in the franchise. I really do love it. And it’s less of my #2 entry and more of a #1A.

So what makes Part 2 at least equal to Part 6 after all of that praise?

Look, these movies aren’t known for their characters. You basically have a cast of cadavers walking around, waiting to get struck down by Jason. But this movie? You actually care about the camp counselors here. They have relationships and problems and aren’t just clichés. Actual work went into establishing the protagonists so that you cared if/when they perished.

Especially Ginny, who is up there with 1980’s Alice as the best Final Girl of the franchise. She has real heart and depth! She is also pregnant, even though the movie only ever hints at that!

You also have the least competent iteration of the Crystal Lake Killer you’ll ever see, as Baghead Jason falls off a chair, gets hit in the balls, cowers from a chainsaw, and is defeated by a sweater. There’s a kind of ironic joy to all of that.

It may not be as well-rounded as Part 6, but it really is a blast to watch.

Having watched the entire series again in the last 13 or 14 months, I feel good about this rating. The margin between parts 2 and 6 is so damn razor-thin, though; it would really vary from day-to-day which I might choose to watch over the other.

But that’s it for my recap of the Friday the 13th series. What movie franchise should I tackle next? Let me know in the comments, and I’ll add it to the list!

Until next time… take care! And always remember: you have stupendous tits!

2 thoughts on “Ranking The Franchise: Friday The 13th”