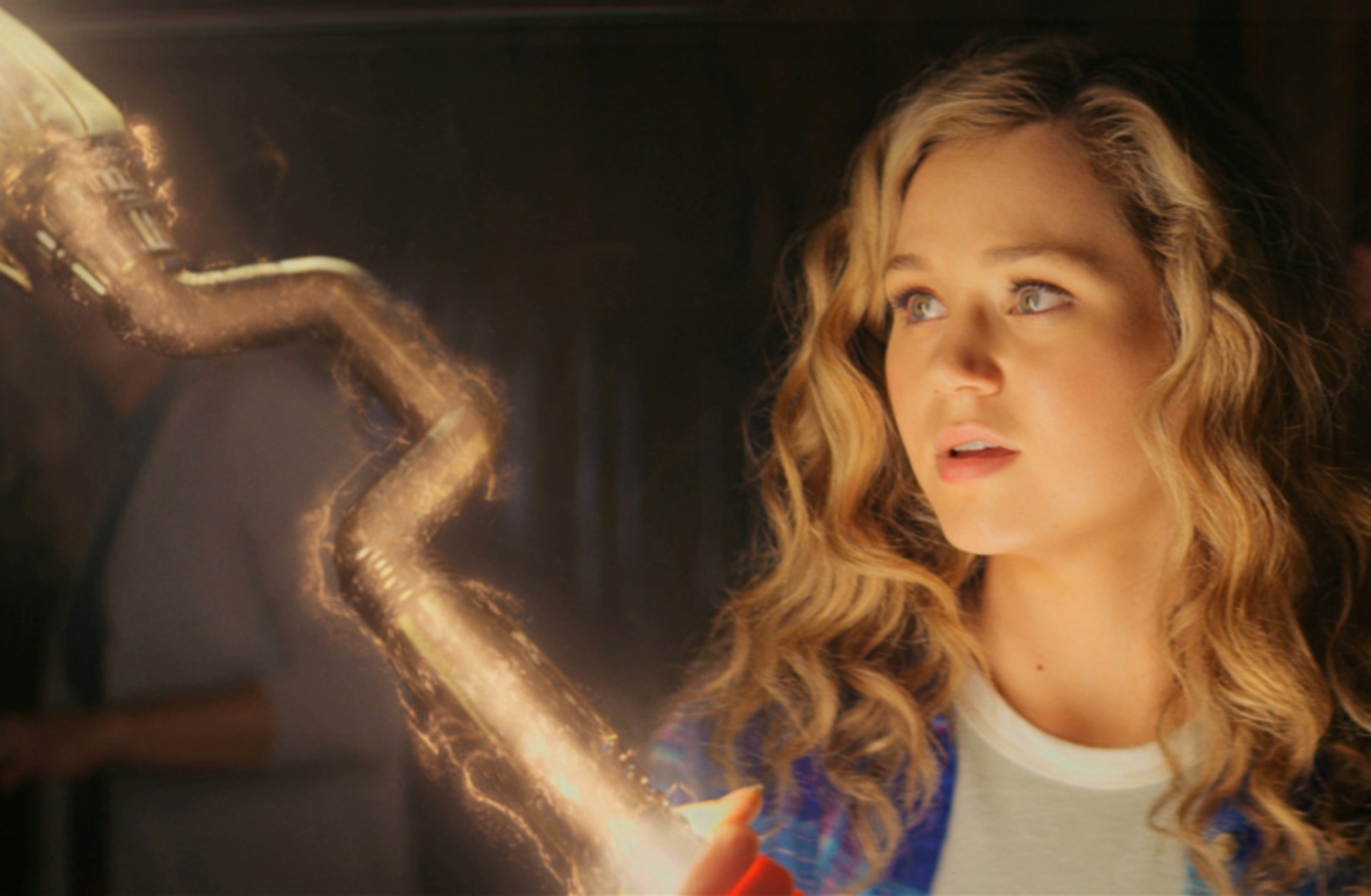 There’s no real reason for it. I used to watch a lot of the ol’ boob tube. But I just never have the nerve to sit down and consume television these days. I think the advent of streaming content has had a negative effect on me. My wife watches approximately every show that airs on every channel, but she watches it all in binge format, episode after episode.

I actually miss the good old days of weekly programming. I think it helped me retain things better.When I watched a show one episode at a time and had days between episodes to discuss and process and speculate with friends, it ll felt more defined to me. When I watch three or four episodes of a show at once, it all runs together into a blur of vaguely recalled events.

So where I am in my life, if my wife doesn’t make me sit down and watch things with her, I don’t. I am much more likely to be spending my down time playing video games, writing, or watching YouTube videos.

There are just… so many comic book based shows out these days, though. And given I do enjoy spending time with my wife, and she mostly just watches TV thanks to our brave new world of being too afraid of the outside world and its pandemic, I have been making time to watch several of these programs with her. And the nice thing is that I can tap out after an episode or two, allowing her to switch over to Chopped or Handmaid’s Tale or Naked & Afraid or whatever else she is watching now.

So with several comic property shows in our recent rear-view mirror, how did they stack up? Let’s take a look!

When I say that the DCUniverse and CW joint venture Stagirl is the worst of the shows we have watched lately, that says a lot more about the rest of this line-up than it does for Stargirl, which I found entirely engaging and worth my time.

It did have some problems, though. The fully intentional hokeyness of some of the villains in the Injustice Society of America didn’t quite work for me. The Gambler, Brainwave, Sportsmaster, and Icicle chewed a LOT of scenery, and while I know it was all played for effect–to give the villains an old-timey kind of feel–it just felt hackneyed at points. Also, I feel like the show rushed into giving Courtney a team to work with when I would have been happy for a solid season of just Courtney and Pat. The building of Stargirl’s own JSA-in-training felt like it should have been a plot for season three or so.

That said, Brec Bassinger, Luke Wilson, and Amy Smart were all absolutely fantastic on this show. They more than made up for whatever inadequacies the rest of the cast had. Meg DeLacy was also tremendous as Courtney’s rival Cindie, who becomes the villainous Shiv. And for what I said about the JSA being rebuilt so early, it was a blast seeing Easter Eggs like the Thunderbolt and the Green Lantern, and being excited for what will happen with them going forward.

Exactly the opposite of the eventual #1 show on this list, I thought the second season of Umbrella Academy was a slight step down from its first. Still great, but less memorable and bit too much in the way of just repeating season one’s plot points.

Kate Walsh is a joy, sure, but her returning as The Handler for a second season as the core antagonist felt unnecessary. And the way they hand-waved away her demise in season one with one throwaway line of dialogue (“Thank goodness I had the steel plate in my head from an old mission!”) reminded me of a joke about lazy writing from the 2005 Aaron Eckhart flick “Thank You For Smoking”.

Additionally, the eminently fun Hazel and Cha-Cha role of pursuing mercenaries is handled by three Swedish siblings here, and nothing about them is as enjoyable as the first pair.

Aside from that, the actors are all still amazing, and it’s hard to really point any out at the expense of the others. But I will! Aiden Gallagher (as Five) and Emmy Raver-Lampman (as Alison) are two characters I couldn’t take my eyes off of either season, and David Casteneda’s Diego rose from my least favorite of the siblings in season one (where he was too much a Batman prototype) to maybe my favorite in season two (where he was given so much more to do and got to be a lot more humorous).

Still, the story was fun, and seeing how the siblings built to the conclusion was a great ride.

Thank god the DCUniverse Harley Quinn cartoon exists to wash away the terrible taste of Birds of Prey, which was such an enormous step down for DC after Wonder Woman, Shazam (and even Aquaman, which I didn’t even think was that good). Birds of Prey made me long for Suicide Squad.

The Harley Quinn cartoon can bastardize characters such as Jim Gordon, Batman, and Batgirl, but it’s done in such a loving and fun way that I don’t even mind. The show is nearly wall-to-wall laughs, but there is real emotion and stakes to be had, too. The Harley Quinn/Poison Ivy/Kite-Man love triangle was brilliant because you could simultaneously root for both Harley AND Kite-Man to win Ivy’s heart. The show actively made you feel bad for choosing one over the other.

King-Shark, Clayface, Dr. Psycho, and Sy Borgman (and HOLY SHIT, seeing it written out finally finished that joke for me) made for a marvelous supporting cast of goofballs, and the voice talent across the board is great. While Umbrella Academy was a step down in its second season, and the next show was a step up in its own, I think Harley Quinn maintained a high level of quality across both of its own.

I thought Doom Patrol season one was a perfect serviceable, if somewhat forgettable, introduction to the DC Comics’ team of misfits. I put off starting Doom Patrol in favor of the other shows here because I was reluctant to really keep going with a show I thought was just OKAY.

I’m glad I eventually caved and checked out season 2, though, because it was lightyears better than the initial offering.

While season one got itself bogged down in origin stories and building its own universe and wackiness for the sake of wackiness, Doom Patrol season two was free to just tell its own story. The coalescing tales of The Chief and his daughter Dorothy, Rita’s examining of her childhood trauma, Larry reuniting with what is left of his family, Jane been pressured by her other personalities, and Cyborg finding a love interest were all more-or-less equally engaging.

Just like with Harley Quinn, Doom Patrol could have you in stitches in one moment, aghast the next, and then tied in an emotional knot not long after. It flips through emotions like a bored child reading Cliffs Notes, but it is so perfectly organic. You never feel jarred from the sudden tonal shifts.

The high point is undoubtedly the fourth episode, Sex Patrol, which is maybe one of my favorite single episodes of any show I’ve ever seen.

This is all without factoring in ANOTHER second season offering, The Boys, because, well… we never finished it. It wasn’t because we lost interest, but I think Supernatural’s final season started, and we watched that instead.

So there’s my rating and ranking of some of the most recent comic properties to hit the… small screen? Do we still say that? TVs have gotten so large.

Who even knows what all is coming out in the next few months? Falcon and Winter Soldier has to drop SOMETIME, right? And WandaVision shortly after that (come on, Disney Plus… make me stop regretting owning you). Locke & Key should have a second season sometime.

The fun never seems to end these days.

But tell me… what are YOUR grades for these shows? Did you watch all of them? Any of them? How would you order them? Let me know in the comments.